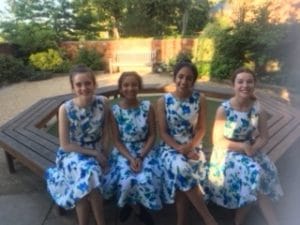 Please click on the ‘Community Heading’ for further details about adult choirs and events.

All young singers who register for class tuition  automatically belong to the JTPTrust Academy Choir of Swindon.

The JTPTrust Academy Choir annual fundraising events include the ‘Christmas Garland’ in December, the Spring Championships and the Summer Gala in July. Choirs also engage with the  community in fundraising concerts for other Charities. The Academy Choir is made a up of the Junior Choirs, the Concert Choir and the Barbershop Quartet.

The JTPTrust Concert Choir is an auditioned choir for girls who have reached Intermediate (Grade 4-5) standard. We encourage talented girls from local schools to audition for our Concert Choir, whether or not they take other lessons in the JTPTrust.

The Concert Choir reached the finals of the prestigious ‘Music for Youth’ competition at the Queen Elizabeth Hall London  in 2004 and the whole Trust performed at in the finals at Birmingham Conservatoire in 2007. We were again finalists in Birmingham Town Hall I  2016, performing a selection of songs entitled ‘Four Weddings and a Funeral’.

The Academy Choirs also take part in major Trust productions. Past performances include included Wyvern Gala performances, the Youth Opera ‘Brunel: the Little Man in the Tall Hat’, and ‘The Barnstormers’ which the  Trust performed in both Swindon and London, all with music by Betty Roe and words by Marian Lines. Most recently the Trust performed Betty Roe’s only pantomime ‘Dick Whittington’.

The adult Community Choir is an ad hoc group which performs occasionally  ‘from scratch’ at workshops and concerts. This choir came into being at the 2012 production of  ‘Swindon the Opera’ with funding from the Jubilee Lottery grant. It is open to the local community.

The Trust is proud to have former singers in the National Youth Choirs of Great Britain. In 2011 the JTPTrust Junior Choir performed alongside the NYCGB in  ‘Worldsong’ at the Royal Albert Hall.