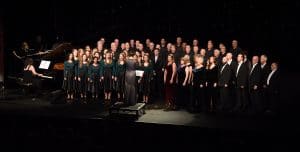 The JTPTrust works in partnership with various local organisations to deliver high quality musical performances and experiences. Most recently the JTPT Concert Choir and Ladies Ensemble have performed at the High Sherriff’s Wyvern concert ‘Uncelebrated Journey’, leading the Finale items alongside local groups Ten in a Bar, Wessex Choir and Commonweal School.

Adult Workshops offer opportunities for singers in the Swindon area to gain experience in solo singing technique, choral and ensemble performance and related vocal issues. Such workshops normally take place at St Barnabas Church, Gorse Hill,  a venue with which the Trust maintains close links. Past workshops have included sight-singing and a visit from Dr Meribeth Dayme, of ‘CoreSinging‘™.

The JTPTrust Community Choir is an ad hoc made up of adult singers in the Swindon area. From time to time this choir meets to rehearse for performances.  Typical occasions might include an informal ‘Sing and Share’ occasion or a larger event including the JTPTrust AGM. Anyone wishing to take part in this choir should contact infojtptrust@aol.com

Adult Productions (Swindon Community Opera) have included ‘Dear Georgette’ by Viv Hendra and ‘The Beggars Opera’ by John Gay at the Swindon Dance Town Hall Theatre, also ‘Not in Front of the Waiter’ by  Offenbach and 12 Nursery Rhymes’  (with a Twist) by Geoff Westley for the Swindon Fringe Festival.

Funded Community Projects The JTPTrust has undertaken a number of large Community Projects and enjoys a close association with the composer Betty Roe, who composed the JTPTrust youth opera Brunel: the Little Man in the Tall Hat’ for the Brunel 200 South West Celebrations, with libretto by the late Marian Lines. The Trust’s largest community project was ‘Swindon: The Opera’,  a collaboration between Betty Roe and librettist  Matt  Fox, for which  the Trust received a £60,000 Jubilee grant from the Big Lottery Foundation, and received extensive national coverage.  The Trust also staged a one-act opera ‘Lunch at the Cooked Goose’ , also by Betty and Marian, which toured to the Truro Festival.

Brunel The Little Man in the Tall Hat by Betty Roe and Marian Lines was revived in July 2016 to great acclaim, in partnership with ‘Steam Museum as part of the Swindon125 Celebrations,

Staged performances of children’s musicals by Betty Roe and Marian Lines have included ‘The Barnstormers’, which the Trust performed in 2011, in both London and Swindon, ‘The Trouble with Spells is’ ,’Christmas Boxes’ and, most recently ‘Dick Whittington’.