Costumes stored sorted and listed -thank you Flora and Poppy.

Over the years, the JTPTrust has collected a large number of costumes and props, skirts, waistcoats, sashes, dresses, witches cloaks punk fairy skirts, pearly kings and queens, even to the Brunel’s hat!

Many thanks are due to Sue Herbert for building up and being guardian  of these costumes for many years.

Now we have moved the entire set of costumes to a Lock-up store where they will be more accessible. Grateful thanks to Flora Wilkins and Poppy Fox-Thompson who have been busy listing the costumes since January. Here is Poppy at the store 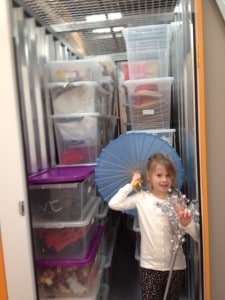 A good job done – that’s to everyone, including baby Robin!