Home / Uncategorized / ‘Into the Woods’ – revisiting the JTPTrust 2009 cast.

There is something magical about certain performances and the memory of them forges a lasting connecion between the performers involved. Watching the recent Disney film version of Sondheim’s ‘Into the Woods’ stirred fond memories of our own JTPTrust production of the show in 2009.

That year was ‘one of those special moments in time’ when the JTPTrust had 15 highly talented ‘gap year’ singers, some  just on the brink of university, music and  drama colleges. 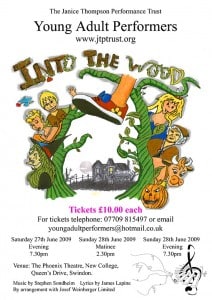 Herewith some updates on our talented cast of 2009, starting with Jack Townsend, who played his namesake  ‘Jack in the beanstalk’ and also drew the poster.  Jack, who for several years has been a professional entertainer, is presently touring in a One Direction Tribute group, prior to a further professional cruise to Canada in the Spring. Here he is on the left of the picture below. 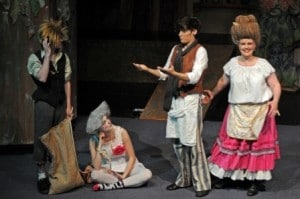 Also pictured above is Ashley Green as Milky-White the Cow, Ed LeCoyte as The Baker and Amy Grimshaw (then Amy Cole) as the Bakers Wife.  Ed LeCoyte is presently working in London, is engaged to Sarah Covey (The Witch) and is returning to take the part of the ‘Groom’ in ‘The Bridal Ballad’ , part of the Madame Reynard’s April Fringe Festival.

Amy Grimshaw, the Baker’s Wife, works with the JTPTrust and Gemma Short School of Dance in Swindon and appeared last year as Mrs Sowerberry in SALOS’ production of ‘Oliver’.

Ashley Green (second left), so memorable for her performance as Milky-White, the Cow, is presently training to be a Salvation Army Officer and, as part of her  ‘personal initiative project’, she is currently singing with a Choir called Mind and Soul  (part of Maudsley Hospital in Denmark Hill); a choir whose purpose to promote mental wellbeing and reduce some of the stigma surrounding mental illness through singing.

Sarah Covey’s (pictured below)  recent success as understudy to ‘Killer Queen’ in ‘We Will Rock You’ is well documented and she is presently rehearsing for a London Fringe Production of James Bourne’s Musical ‘Loserville’ which opens at the Dominion Theatre on 25 February. 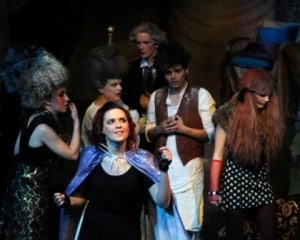 In the far background, David Casey is just visible as ‘The Steward’ to the ‘Royal’ family. Having graduated with an MSc in Physics, David is currently working for MAHealthcare in London, writing programmes for their medical conferences – and he is also conducting the work choir! David sings ‘ad hoc’  with various choirs around London and is also singing in a band.  David says ‘I went to see ‘Into the Woods’ at the cinema a couple of weeks ago actually, was a great blast from the past! I still knew most of the words!’ 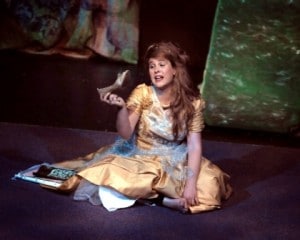 Above is Jessie Thompson as Cinderella and below, with her ‘ Prince’, Matt Fox. 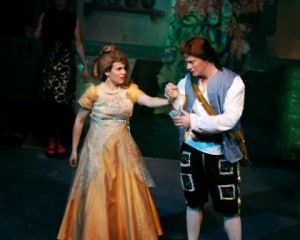 Jessie and husband Matt Fox are presently organising the third ‘Madame Reynards Fringe Festival’ which takes place in Swindon from April 11th onwards. Jessie is a JTPTrust Team Teacher and also teaches for the Swindon Music Co-operative, as does ‘Stepmother’ Andrea Lockwood. Here is Andrea, pictured below with Cinderella’s ‘Sisters’,  Natatie Chequer and Flora Thompson. Natalie is lead soloist for the Swindon Gilbert and Sullivan society and Flora, who specialises in singing in Early Years, is just moving back to Swindon. 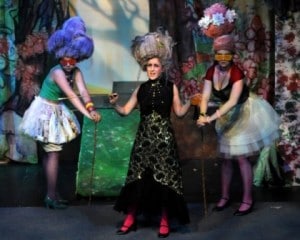 One of the very special ITW performances was given by Francesca Smith, whose interpretation of  Red Riding Hood was funny, dark and slightly psychopathic. Here she is ‘holding the baby’. 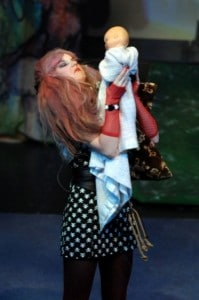 Fran is due to graduate as a Doctor in July after 6 years study at Cardiff University. But before then, she is leaving to work in a Red Cross centre in rural India for 5 weeks. Congratulations Fran!

Other memorable performances were given by Steph Walsh as Jack’s mother, Hannah Masters as Grandmother and Tom LeCoyte as the Wolf. All are busy studying at University and Steph sings regularly as a soloist and duettist alongside Natalie Chequer in Swindon. 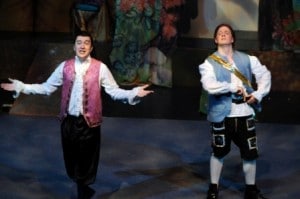 it would be great to know more about the ‘Birds’ too.. 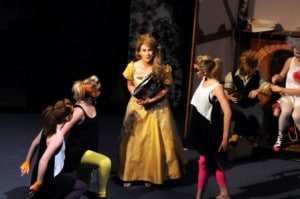