Congratulations to Tilly Wale who came 2nd yesterday in the Finals of the Catherine Lambert Junior Recital Prize, held by the Association of English Singers and Speakers.

Tilly competed against 5 other singers in the The AESS competition Final, which was held at the prestigious Purcell School. She had to prepare a 15 minute recital, including at least one poem.

Tilly chose ‘The Language of Birds’ by Samuel Coleridge Taylor as her theme, and included composers Michael Head, Benjamin Britten, Haydon Wood and Betty Roe in her recital.

Tilly is most grateful to her accompanist Patricia Williams, who really helped her with her preparation and played wonderfully on the day. Here they are together: 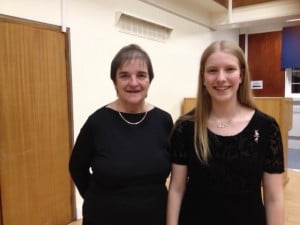 Tilly’s prize awarded by AESS will help her with her studies in years to come.

The AESS is a registered charity whose core aim is ‘to encourage the communication of English words, in singing and speech, with clarity, understanding and imagination’.

Tilly will be singing one of successful songs ‘The Birds’ in the JTPTrust ‘Christmas Garland on 6 December at St Barnabas Church Swindon.