"At the 💜 of singing in Swindon” 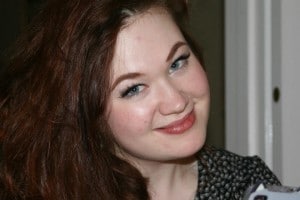 Albert Herring is a comedy opera about a shy boy who is chosen as May Queen in the absence of any suitable girls.

Polly played the secretary to the formidable Lady Billows, and has received excellent national reviews for both the quality of her singing and acting. Artsdesk describes her character Florence as ‘gloriously glum and pruriently fascinated with the neighbourhood goings on… A thick, sensuous mezzo’ –  and Bachtrack oberves her as being ‘wonderful as (Lady Billows) ferocious, tense secretary Florence Pike, who keeps an encyclopaedia of village gossip in lever arch files, and disqualifies maiden after maiden with acid disapproval’.

Congratulations to Polly who starred as Diana Dors in ‘Swindon the Opera in 2012. Good to hear the fantastic voice again and see the character acting is going far!

Future engagements for Polly include a summer month with British Youth Opera, and a further year at the RCM.