Polly Leech is to resume her Swindon the Opera role as ‘Diana Dors’  at the Gala Concert on Sunday 6 July before taking up a Post-Graduate Scholarship at the Royal College of Music in September.  Polly, who had singing lessons in the JTPTrust as a child, will also be displaying her virtuoso vocal skills in  ‘ Una Voce  Poco Fa’ by Rossini in the  concert.

Polly was part of the Samling project whilst at Durham University and has been already coached by famous singers.  Since completing her academic studies Polly has enjoyed a year in her home town of Swindon, taking part in the Gilbert and Sullivan Society and winning classes in the Swindon Festival. 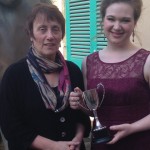 Below is Polly in her role as Diana Dors. 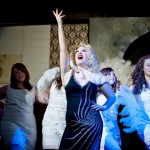 Tickets are available for the Gala Concert at the Wyvern Theatre web-site.